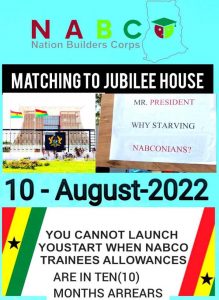 The Nation Builders Corps (NABCO) have threatened to stage a nationwide demonstration if government denies to pay them their delayed allowance which was disclosed to the media since November 2021 and therefore prepared to face the Government of the Republic Of Ghana to address their grievances to the president on 10th August, 2022.

The threat follows several demands made by the trainees nationwide to their employer to release their delayed allowances which they reported haven’t been paid since November 2021.