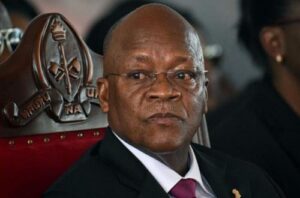 The cause of his death is unknown but local reports say he was battling covid-19.

The 61-year-old President has been missing from the public for the past 18days sparking rumours the coronavirus sceptic leader is ill with Covid-19 or unwell and incapacitated.

Until his death, authorities refused to disclose Magufuli’s ill-health and his whereabout.

A man was arrested for allegedly spreading what was described as false reports that Magufuli was seriously ill in the Kinondoni area of Dar es Salaam, Regional Police Commissioner for Kinondoni Ramadhani Kingai said at a press conference Saturday, according to local reports.

Magufuli who is one of Africa’s most prominent Covid-19 sceptics last year said the disease had been eradicated from Tanzania by three days of national prayer. He cast doubt on tests to determine covid-19, discouraged Tanzanians from wearing masks, keeping a distance from others, and the use of vaccines to combat the disease.

Opposition politicians raised questions about the president’s health after at least one official close to him died recently from alleged covid-19 complications which Magufuli described as a respiratory disease.

Opposition leader Tundu Lissu, who lost the October presidential election to Magufuli and in exile claimed in a series of tweets that the president had been flown to India in critical condition after first being taken to neighboring Kenya for COVID-19 treatment.

But Tanzania’s Prime Minister Kassim Majaliwa said on Friday, March 12, “Those claiming he is ill are haters,” yet refused to comment on the whereabout of the president or whether he is ill or not.