4 Year Old Boy Found Dead In A River At Nkwanta

4 Year Old Boy Found Dead In A River At Nkwanta

A two year old KG pupil Stephen Anokye has been dumped in a stagnant water at Nkwanta a suburb of Mankessim in the Mfantseman Municipality of the Central Region.

Speaking to the Grandmother of the child Aunty Mansa said that, the boy got missing on last Saturday when they were at a Funeral and from Saturday all effort had been done to see him through serious searching but couldn’t find him till Yesterday in which some one informed them that there is a boy dead in a stagnant water.

According to the Grandmother, she suspected that the boy was killed and dumbed in the water because the water is not full which the child can fall and died in it so she suspect someone killed him and dumbed him there. 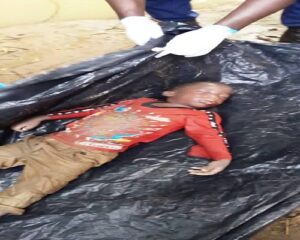 Speaking to Adom FM News Reporter Kofi Otabil, Father of the boy Ebow Mensa also said, when the boy got lost, they reported the incidents to Police and some information centers in the area, but couldn’t found him only to find out that the boy is dead in the stagnant water.

Lastly, one of the Opinion Leaders in the area Mr.Bright Abaka also explained that, they found blood coming from the mouth and nose of the boy of which they suspected that he was killed by unknown people and dumped him in the stagnant water.

He finally appealed to the police to do a massive investigation to the matter and arrest anybody who is behind the dead of the boy.

He finally appealed to the Mfantseman Municipal Assembly to do a fence wall on the water to prevent future occurrence because this is not the first time somebody has been found dead in the same water.