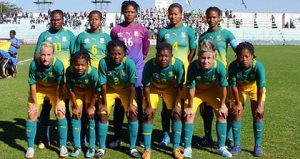 The match took place on 23 July 2022 at Prince Moulay Abdellah Stadium in Rabat, Morocco between Morocco and South Africa. This was the first final to not feature either Nigeria or Equatorial Guinea, the only teams to have won the competition.

South Africa won the match by beating Morocco 2–1, claiming its first ever title in its sixth attempt.