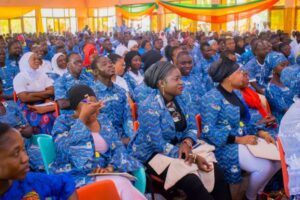 Eventually, the hungry trainees of the governor flagship program narrated that, due to the poorest nature of the payment, they even find it difficult to cope with their families.

“Truly, this kind of treatment must be ceased, how can you pay us around 28th- 30th of April for March stipend whilst government workers who receive higher wages as compared to the 700 cedis has been settled and we can no longer hold on to this hectic treatments”.

The Trainees were very disappointed that, the authorities of the scheme have deliberately treated them in such manner constantly, mainly for their selfish gains.

Furthermore, they disclosed the tactical means by the CPTP to delay the so called careerpathway process, since the nabco Secretariat already have their educational documents on their system and up-to-date they haven’t been posted permanently as promised before the general election 2020.

“How can you be extending dates and time here and there, you already have our documents on your system”
meanwhile,families and friends are being picked to fill vacant positions instead of nabco trainees”they stated.

Trainees therefore pleaded to the incumbent government to enhance their permanent employment as promised before the general election 2020 and to settle their stipend.