Nabco-We want our Arrears to be Settled with Immediate Effect 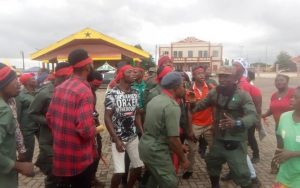 Nabco-We want our Arrears to be Settled with Immediate Effect

The National President for NABCO Trainees Association of Ghana (NABTAG) has urged the government of the Republic Of Ghana to pay their 4 months arrears With immediate effect.

Speaking in an interview with the media commended the government for instituting the NABCO program which has been successful since it’s commencement, because it has employed over 68,000 graduates which for that matter has reduced the unemployment rate in the country.

The Nabtag president stressed that, despite the success story of the program, the government still owe the members of the Association with 7 months salary arrears which has made life so unbearable for them, hence government must intervene to settle the debt with immediate effect.