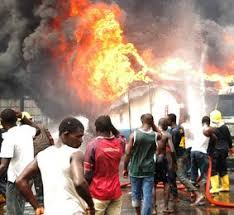 The administrative block of the Mampong Technical Institute in the Ashanti region has been gutted by fire. 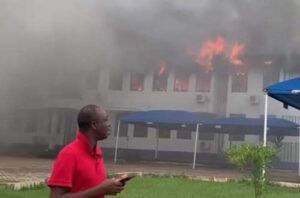 The fire reportedly started at about 8:00am today April 19.

Fire Service personnel have been able to stop the fire after eight offices including the accountant’s office were completely burnt.

According to a staff at the school an eyewitness, the fire started from the top floor where the conference room is located and was raging on to the ground floor before the intervention of the fire service. 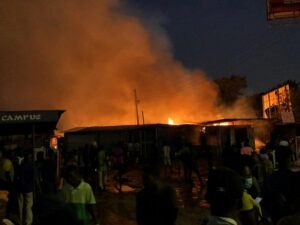 He further noted that the cause of the fire is unknown, and no one has been to the office where the fire is reported to have started.

Other administrative documents, certificates, receipts, etc have been destroyed.

This comes after fire ravaged over 40 shops at the Kumasi Central Market with property worth millions of Cedis destroyed by the inferno.

He explained the main cause of the fire was a result of lightning during Sunday night’s downpour in Kumasi, triggering fluctuations in power and the consequent fire outbreak.

“At about 10:00pm on Sunday, we had a distress call, so our team rushed to the scene. Our major problem was access to the actual scene because of haphazard siting of shops without proper roads and access routes.

“Nonetheless, our team manoeuvred and managed the fire from spreading. So at about 11:30pm, the fire was quenched.”