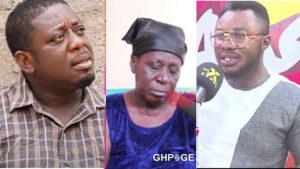 Angel FM presenter and pastor, Prophet Adu Boahen has refuted claims that Kumawood actor Osei Tutu was under spiritual attack that led to his death.

The man of God alleged that Tutu was not killed by a ‘juju’ attack as claimed by his mother but was rather involved in a drug business.

Ajagurajah reacts to death of Osei Tutu over juju claims by his mother
Osei told me his colleagues in the industry are behind his sickness – Late actor’s mother speaks
According to Adu Boahen, Tutu was arrested some years ago and was injected with a drug which poisoned his system and led to his death.

He explained that his death was not a spiritual attack by his Kumawood colleagues but was poisoned by a white man in jail.

This comes after Tutu’s mother granted an exclusive interview with GhPage TV where she revealed that nine needles were removed from his throat.

According to Tutu’s mother, her son was bedridden for two weeks and before he gave up the ghost, he informed his mother that some people in the movie industry are behind his illness.

On 17th May 2021, the death was reported of a popular Kumawood actor, Osei Tutu after battling a short illness.