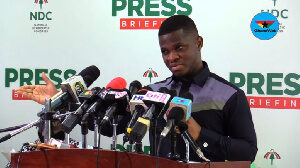 The flagbearer for the National Democratic Congress (NDC) John Dramani Mahama has exposed the lies of Communications Director of his party Sammy Gyamfi on as regards payment of MenzGold customers.

Sammy Gyamfi is on record to have said that if John Mahama wins power, his administration will pay all monies owed by financial institutions which have been made defunct by the Akufo-Addo led administration.

“MenzGold customers, this is your time, Gold Coast… We said all financial institutions… Do you think the NDC discriminates? All of them, all those institutions… I am telling you they are all part. Wherever they are listening to me now, I’m speaking in my capacity as the Communication Director of the party. All of them are covered under this promise,” he said in an interview on Accra-based Asempa FM weeks ago.

But former President John Dramani Mahama in an interview on Starr FM which was monitored by MyNewsGh.com said he will not pay MenzGold clients.

The NDC leader said he has never said anywhere that he will pay clients of the defunct gold dealership when he’s given a second term.

He added: “Menzgold is a different kettle of fish because we don’t know the extent of what the indebtedness is. I’ve not seen any document that shows that this is how much it is. So unless you investigate and find out.

“It looks like this government has been reluctant to investigate it or even go after those who fraudulently took people’s money. And so I said when we come, we’ll pursue and find out what the true facts are and we’ll take remedial actions to alleviate the suffering of the customers.”