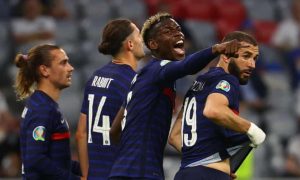 Peep peep! The world champions start their campaign with an assured victory in Munich. There wasn’t a huge amount in it but France were a bit smoother, a bit calmer, and won the game without really getting out of second gear. 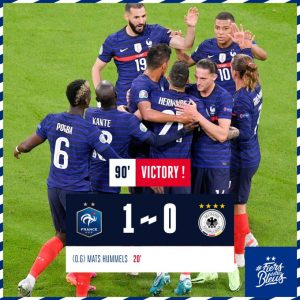 90+4 min Rabiot is replaced by Ousmane Dembele. Talking of which.

“Rabiot has been brilliant,” says Kári Tulinius. “He marked Havertz out of the game, and has generally been the stone in Germany’s shoe for the whole game.”

90+3 min “So one of the favourites only wins thanks to an own goal,” says Lizz Poulter. “Not a devastating display of form.” 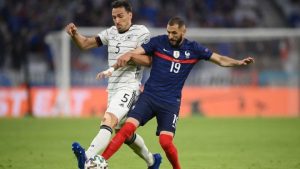 You don’t always get the full picture when doing an MBM, because half the match is spent looking at a computer screen, but I think France have looked terrific against a German side who will surprise a few people in the next fortnight.

90+1 min The pictures are back, and a groggy Adrien Rabiot is receiving treatment. There are six minutes of added time, though it should be seven or eight now because of this stoppage.

ITV HAVE DONE IT AGAIN!
89 min They’ve gone to an Alipay advert mid-match!