A 52yrs Woman Claims To Be The First Daughter Of Late Prez. Rawlings 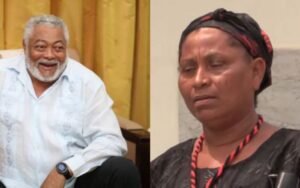 A 52-year old woman by name Abigail Rawlings Mawutor in an interview with SVTV on Monday January 25 alleged that she is the first daughter of the late Former President Jerry John Rawlings.

According to the 52-year old woman, she had told Grace Omaboe popularly known as Maame Dokono about it in 2003 when she paid her a visit but Maame Dokono cautioned her not to mention it anywhere and gave her money to travel outside the country.

“Maame Dokono knows about this. In 2003, I paid her a visit and told her about my story, but she told me if I don’t keep quiet about it I may die. So she gave me money and I left the country,” she revealed.

Touching on how her mother met the Former President, she told Ayisha the host that the two partners met during the military training days of Jerry John Rawlings.

However, when her mother became pregnant, the veteran soldier denied responsibility and asked her to keep it to herself.

According to her she had been to the external family of Rawlings at the village and most of them know her.

“Most of the external family in the village know me. When my mom told me about my father, I went to the family house,” she said.

The 52-year old said she is ever ready for any paternal test to prove her claim.

Myjoyghana vastly deliver great news and entertainment. Email: nolafixer71@gmail.com Call/WhatsApp: +233544000083 CLICK TO JOIN OUR WHATSAPP GROUP
@myjoyghana
Previous Some remarkable college presidents of Jerry John Rawlings who are still alive after he depart
Next Nabco Trainees Who Couldn’t Accomplished Their Career Pathway Is Extended To 31St Of January