Mr. Azure Awuni, in an investigative piece, titled; “Contracts for Sale”, exposed how the PPA Boss was using his position to award contracts for his personal gain, a situation which involved in conflict of interest.

After an initial suspension for the matter to be investigated by the Commission for Human Rights and Administrative Justice (CHRAJ), Mr. Adjei has finally been sacked by the President of the Republic.

In a letter from the Presidency which was dated October 30, 2020, the PPA Boss’ appointment was terminated. The President confirmed that Mr. Adjei’s ‘personal interests conflicted with the performance of his functions as CEO and Board Member of the PPA’, whilst commending the CHRAJ for the thorough investigations done into the issue.

Mr. Awuni appears very pleased with the President’s move. According to him, it is an indication that Mr. Akufo-Addo treated the subject with the urgency and seriousness it required.

“It feels really good and it starts right from the president to CHRAJ. I commend the President highly for not sitting on this matter and not referring it to the suspicious sources that we know that when cases are referred to, we never get good results so I am happy that something concrete is being done about it,” he said on Joynews’ Newsfile show Saturday.

Manasseh, however, was sure to add the fact that he is expecting more.

“….As far as I’m concerned, the President has done his work and has done it well. …We are getting some results, but we are still expecting more,” he added.

Find the full termination letter below:

Find the full termination letter below: 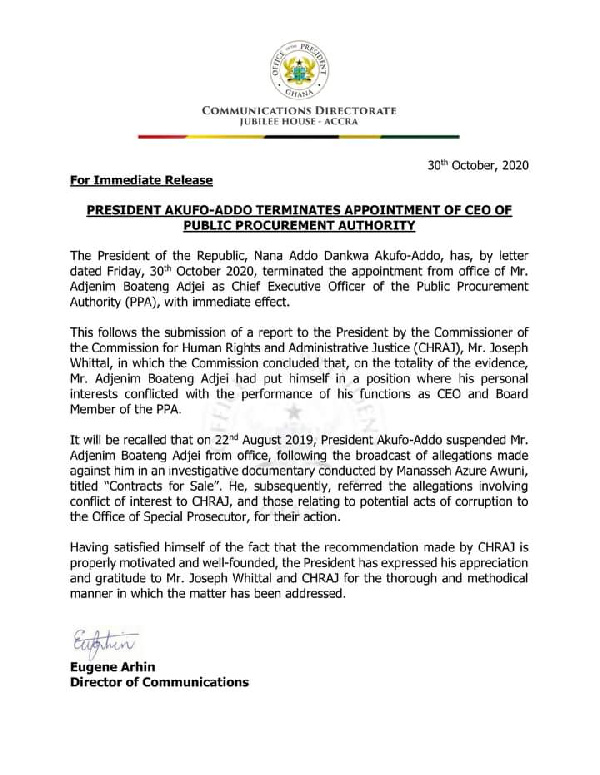