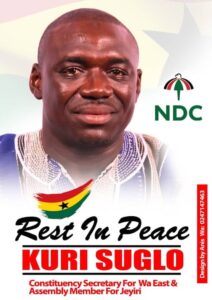 The National Democratic Congress’ (NDC) secretary for the Wa East voting demographic, Kuri Suglo, has been accounted for dead.

In spite of his death, there isn’t promptly known cause of it, reports show Mr Suglo passed on Sunday, November 29, 2020.

Mr Suglo was additionally the Assembly Member for Jeyiri in the Wa East Constituency before his death.