Minority Spokesperson on Finance, Cassiel Ato Forson, has dragged Kennedy Agyapong to court for stating that he [Ato Forson] has been named as being behind a plot to murder the Member of Parliament for Agona West, Cynthia Morrison.

Mr Forson states that Kennedy Agyapong and his Kencity Media Company defamed his person when they published the false report that he is the mastermind behind the alleged plot to kill the Agona West MP — a matter which is currently under investigation.

Kennedy Agyapong, who is himself MP for Assin Central, alleged on ‘The Seat’ a programme on Net 2 TV – owned by Kencity – on Monday, October 26, 2020, that suspects arrested in the ongoing case told the police during interrogations that they were contracted by Ato Forson to carry out the killing that was foiled by police.

In a swift action, Ato Forson, opposition MP for Ajumako-Enyan-Esiam and a former a Deputy Finance Minister said in a suit dated October 27 and sighted by GhanaWeb that the comments made by Mr Agyapong on his Net 2 TV are libellous and without any justification. 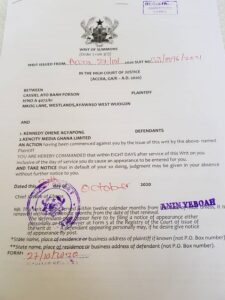 The Minority MP says the comments will cause the right-thinking members of the society to question his integrity, especially as a Member of Parliament and a former government official.

“The defamatory words were uttered, broadcast and published by the Defendants recklessly and not caring about the irreparable damage that will be caused to the reputation of the Plaintiff.

“The defamatory words were uttered, broadcast or publicised without caution in a malicious manner with intent to cause damage and injury to the Plaintiff’s hard-earned reputation,” Mr Forson said his Statement of Claim.

Among other things, he wants the court to order the Kencity Media to pay GH¢500,000 in general damages to him.

He also wants Ken Agyapong to be ordered by the court to pay GH¢300,000 in general damages and an additional GH¢600,000 to be paid by both defendants as a punitive measure.