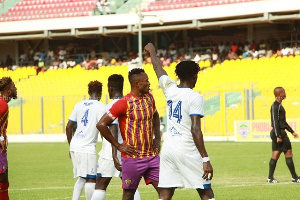 Hearts of Oak’s woes continued on Sunday as they suffered a 3-0 defeat to Medeama.

The Phobians are now without a win and no point after matchday two in the Ghana Premier League.

Their opening day defeat against Berekum Chelsea led to the sacking of head coach Kim Grant.

They travelled to Tarkwa with interim manager Edward Nii Odoom. He failed to get best out of the players as Medeama cruised to a famous victory.