Ben Ephson has boldly predicted that Mr. Mahama, as it stands now, is the best person to lead the NDC.

According to him, Mr. Mahama has over the years, especially during the 2020 Presidential Elections, proven beyond every reasonable doubt that the NDC needs him again as their flag bearer.

Mr. Ephson’s open prediction will clearly be welcomed by the Mahama camp, but it is ruffling the feathers of those who have plans to contest primaries to enable them to lead the NDC in 2024.

According to Mr. Ephson, who is the Editor of DAILY DISPATCH, Mr. Mahama, during the 2020 Presidential Elections, performed excellently by garnering a colossal number of votes across the 275 constituencies in the 16 regions of the country.

Speaking on Accra-based ‘Okay FM’, he noted that for Mr. Mahama, who was a huge underdog prior to the 2020 elections, to poll over six million votes, indicated he was a strong force.

Mr. Ephson noted that Mr. Mahama’s performance, which nearly sent the 2020 polls into a second round, showed that he was very popular in his party, the NDC.

According to him, Mr. Mahama who has appeared on the ballot paper three times, winning one (2012) and losing twice (2016 and 2020), has marketed himself well to the electorate.

In this regard, he said if Mr. Mahana appeared on the ballot paper again in 2024, which would be his fourth consecutive time, it would give him the chance, more than any NDC member, to win the polls.

Ben Ephson, without mincing words, stated that he strongly believed that no NDC member could pose a decent challenge to Mr. Mahama for the NDC Presidential Candidate slot, ahead of 2024.

Aside being popular in the NDC and in Ghana in general, Mr. Ephson was of the opinion that all the negative things that opponents of the NDC had to say about Mr. Mahama had been said already.

The pollster said as compared to other people eyeing the NDC Presidential slot, it would be difficult for opponents of the NDC and Mr. Mahama to come out with any negative comments against him again.

According to Mr. Ephson, the NDC needed a person that had been tried and tested to lead them to brighten their chances of winning in 2024, and he believed Mr. Mahama was the perfect choice.

Meanwhile, some political commentators have described Mr. Ephson’s comments as a “killer punch” to other NDC bigwigs that are nursing ambitions to lead the party in 2024.

According to them, they are aware that several top NDC members have strong ambitions to lead the NDC as flag bearer in 2024, but they refused to mention names for obvious reasons.

The political pundits said for a pollster in the capacity of Mr. Ephson to come out boldly to support Mr. Mahama, would certainly create anger in the camps of other NDC Presidential hopefuls.

In a related development, reports emerging from the corridors of the NDC indicated Mr. Mahama was still contemplating whether or not to get the party to block all other candidates for him to go solo in the NDC primary.

Nabco demand for arrears before Easter 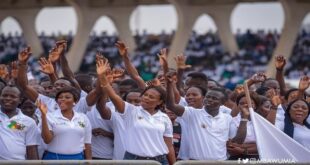 Nabco Validations For April 2021 Are Ongoing And Allowance Will Be Paid Soon.

Nabco Validations For April 2021 Are Ongoing And Allowance Will Be Paid Soon. NABCO Trainees …