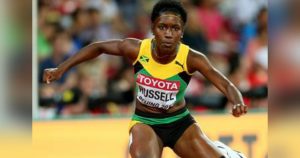 Janieve Russell impacts for a training session on Day 4 of the World Athletics Championships in Eugene, Oregon on Monday.

Having missed out on previous editions of the event, Russell says that she is intent on giving herself the best chance at making the podium, as the first round of the women’s 400m hurdles begin on Tuesday at 7:15 p.m. 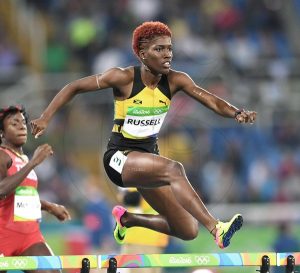 “It was the hardest (at the National Senior Championships),” Russell told The Gleaner on Monday. “I was really nervous. I just wanted to make the team. And now that I am here, I’m just taking it a step at a time, a round at a time. I just have to follow the coach’s instructions and have confidence in myself.”

Russell was a part of the mixed relay team at the 2019 World Athletics Championships in Doha, Qatar, but not in the individual 400m hurdles event, nor in 2017. Her season’s best is 53.63 seconds, which she clocked to win the title at the National Championships, faster than her national teammates Shiann Salmon and Rushell Clayton, who will also be in action.

Russell says that she has been adjusting to the conditions and feels that she is perfecting her technique.

“Personally, I feel like I am doing it,” she said. “I don’t know, from my coach’s perspective but I’m just hoping and being confident and having the faith that I will be executing the way that he wants me to.”

Inspired by Jamaica’s sweep of the women’s 100m, Russell says she hopes that they can replicate something similar with herself, Salmon, and Clayton making it to the final.

“Those ladies have really pushed us to say that we can do it as well,” she said. “And it is just to make the final.”