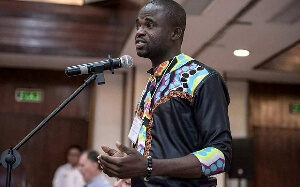 The woes of controversial Member of Parliament for Assin Central, Kennedy Agyapong are set to deepen following Manasseh Azure Awuni’s order to his lawyers to file a defamation suit against the MP.

Kennedy Agyapong who is currently facing contempt charges at the High Court will have a new case on his plate after Manasseh made moves to rid his image of the ‘lies and smear campaign’ made against him by the MP.

In a social media post, Manasseh said he has taken notice of the vile and false campaign launched against him by the MP and will go to the court to seek justice.

He indicated that he was initially hesitant on suing the MP but the unabated attacks on his person and reputation have forced him to go to court.

“My attention has been drawn to a sustained smear campaign of outright lies by Assin Central MP, Kennedy Agyapong, against my person. This started when I published the “Contracts for Sale” documentary that implicated and resulted in the removal from office of the CEO of the Public Procurement Authority, Adjenim Boateng Adjei”.

“However, it is unacceptable to continue to lie blatantly when he knows that there’s no truth in his malicious and defamatory claims that I sought a bribe in the investigative report.”

“My lawyers advised that I ignore him when he started the false publications. But it is obvious he has not and will not stop unless compelled by a court,” parts of the statement read.

Since the airing of the documentary last year, Manasseh has not been spared harsh and unprintable words from Kennedy Agyapong.

In his first reaction to the investigative piece, Kennedy Agyapong while defending the innocence of the sacked CEO of the Public Procurement Authority, accused Manasseh of extorting money from public officials.

Kennedy Agyapong said that contrary to the evils exposed in the documentary, Manasseh was rather the corrupt person who should be condemned.

“He is clean and I will say he has not done anything wrong as some of the NPP members are saying calling for his crucifixion. It is rather Manasseh Azure Awuni who is evil because this is a man, he has been going to take money from,” he disclosed.

“How do you accuse a man who is not running the day-to-day affairs of a company he left years ago of conflict of interest and some of you NPP people are hailing corrupt Manasseh for the investigations,” he asked.

The attacks resumed recently after the president, Nana Addo Dankwa Akufo-Addo acting on a report by the Commission for Human Right and Administrative Justice (CHRAJ) sacked Adjenim Boateng Adjei.

The abuse and allegations are what has incurred the wrath of Manasseh who has instructed his lawyer to sue the MP.