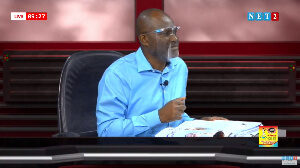 Mon, 9 Nov 2020Source: My News GH
Hon Kennedy Agyapong has finally revealed reasons for ending his crusade against fake Pastors in Ghana, saying it was partly due to pressure from his political party leadership.

According to him, there was a day when a purported flyer was shared on social media claiming he was going to expose Duncan Williams and Dr Mensah Otabil.

He said after the flyer went viral, he received several calls calling to back off from his planned expose in view of the repercussion of walking on such a path.

A confused Kennedy Agyapong said he was shocked by the kind of people who called him when he was not even aware of the existence of the flyer and was even infected by COVID-19 by then.

“I was shocked by the calls that came in that day. Meanwhile, I was infected by COVID-19 by then and I had no idea about the flyer but the calls that came and asked that I stopped is an indication that there is something that is worth investigating.”

Kennedy Agyapong said the videos he has and the evidence he has is a proof that some Pastors who are been worshipped in this country are not what people think and do not need to be accorded that respect given to them.
Read also Sethoo Gh preaches peace ahead of 2020 elections

“I know of a guy who works in the oil and gas sector and lives in Trassaco. This learned guy used to pay $10,000 every month for prayers from one of these revered Pastors. Because I threw the light on the matter, the man has stopped paying the money and nothing has happened to him.”