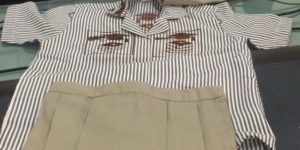 The Ghana Education Service (GES) has dismissed reports that it has contracted a foreign firm to design the new school uniforms to be used in junior high schools from the 2019/2020 academic year.

It said, “it has not imported, neither, has it contracted any individual, locally or internationally to bring in a new uniform for the Junior high schools”.

Earlier this year, the Service announced that new uniforms will be donned by pupils, scrapping the existing one which has been in place for more than three decades.

A statement signed by the Head of Public Relations at GES, Cassandra Twum Ampofo, said the Director-General in April, while introducing the new uniforms, made it clear that parents are to access them from the open market.

It also stressed that the uniforms will not be compulsory as there is a plan to phase them out over a period.

“No student will be prevented from attending school when the 2019/2020 academic year begins in September.”

The uniforms were introduced as part of reforms of the education sector.

GES Director-General Professor Kwasi Opoku Amankwa had insisted that the move was to make the pupils “to start seeing themselves as secondary school students; they are in lower secondary”.